Prague, Czech Praha, city, capital of the Czech Republic. Lying at the heart of Europe, it is one of the continent’s finest cities and the major Czech economic and cultural centre. The city has a rich architectural heritage that reflects both the uncertain currents of history in Bohemia and an urban life extending back more than 1,000 years.

The physical attractions and landmarks of Prague are many. Among the finest is the Charles Bridge (Karlův most), which stands astride the Vltava River. The winding course of the Vltava, with its succession of bridges and changing vistas, contrasts with the ever-present backdrop of the great castle of Hradčany (Prague Castle), which dominates the left-bank region of the city from behind massive walls set high on a hill. The narrow streets and little taverns and restaurants of the older quarters contrast with the broad sweep of Wenceslas Square and modern parks and housing developments, while the great 18th-century Baroque palaces have their own elegance and splendour. Seen from the surrounding hills, the many church towers make up a unique perspective, giving Prague its description as the “city of a hundred spires.” This architectural harmony was enhanced by post-1945 planning, which preserved the ancient core of the city as a major monument and carefully supervised all modern building. In 1992 the historic city centre was added to UNESCO’s World Heritage List. 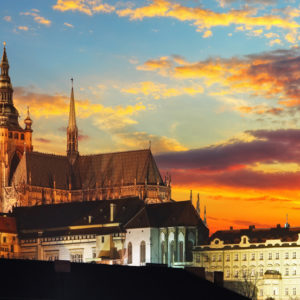 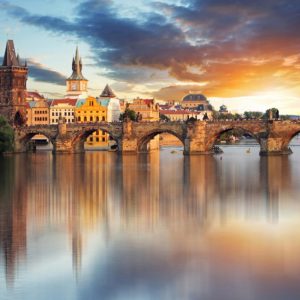 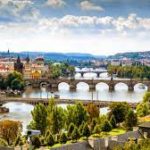 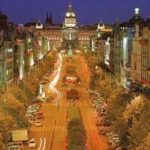 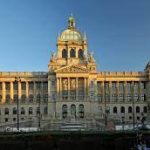 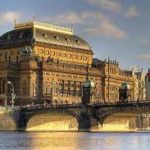 The city’s core, with its historic buildings, bridges, and museums, is a major centre of employment and traffic congestion. Around the core is a mixed zone of industrial and residential areas, containing about half the city’s population and nearly half its jobs. Surrounding this area is the outer city development zone, and beyond this is yet another zone of development containing new industrial areas, parks and recreation areas, and sports facilities. Finally, there is a belt of agricultural land and open countryside, where farms and market gardening projects satisfy Prague’s demand for food.

Much of the inner-city transportation is handled by bus, tram, and subway (metro) systems, which are inexpensive and subsidized. Despite the efforts to meet the demands of the growing population with an adequate public transportation system, the number of passenger cars and commercial vehicles has increased, resulting in plans for a major urban motorway system to include 10 radial arteries connecting Prague with the national road network.

Prague is one of the nation’s major railway junctions, with three main stations and three freight transport circuits. The international airport at nearby Ruzyně was expanded and modernized in the 1960s to serve as a hub at the centre of Europe. A new port has been built at the confluence of the Vltava and Berounka rivers. The passenger boats that ply the Vltava during the summer are a popular tourist attraction.

Prague has a renowned and active musical life, which reaches a high point each year in the internationally known spring music festival. The city’s fine orchestras—the Prague Symphony and the Czech Philharmonic—have won reputations abroad. Theatrical traditions are also strong, with more than 20 well-attended theatres in the city. There are also many museums and galleries, and a Palace of Culture was completed in 1981.

Perhaps the greatest treasures of the city, however, are the 2,000 officially recognized architectural and artistic monuments, ranging in period from the Romanesque through the Gothic to the Baroque, Rococo, Classical, and Neoclassical. The interiors of the buildings, which often house major art collections, have been restored since 1945. The most notable Romanesque monument is probably the 10th-century Church of St. George, behind the north wall of Hradčany. To the west is its more massive successor, the basically Gothic St. Vitus’s Cathedral, the twin spires of which dominate the city skyline. Other Gothic monuments include the Týn Church on Staroměstské (“Old Town”) Square; the elegant Powder Tower, marking the former city walls in what is now the busy Příkopy shopping area; the restored Bethlehem Chapel, where Jan Hus preached in the 15th century; and the St. Agnes Convent, built in 1234 and notable for its collection of 14th-century paintings. The Old-New Synagogue and the tumbling, crowded gravestones of the Old Jewish Cemetery—Europe’s oldest—betoken the strong Jewish tradition in Prague life.

The websites of the Prague University of Economics and Business use cookies to optimize their content and services provided. Please give us your consent to use of them.
Show more info

Select the services for which you want to allow the use of cookies: